I couldn’t help but think when I saw my daughter Ella Ines ao pe do berimbau (foot of the berimbau), and I read the back of her shirt, (Projecto GCAP Marim), when was the last time someone from GCAP stepped foot in FICA D.C., let alone dava un vajiada (hung out and played around)? I knew our presence at the roda was bridging a huge gap. It was common knowledge that we were moving to Salvador Brazil but the huge question always was, “Who you gonna train with?” Few knew that we were relocating mainly because I was going to get married to a Baihano. It just so happens that the man I married was Contra Mestre Jorge from GCAP. We met in 2006, an epic story in and of itself.

Before our move, our camarados warned us, “You know Mestre Moraes doesn’t let his students play at other groups rodas…”  Yeah, I heard that. But Mestre Moraes was always like that. Even Mestre Cobrinha caught flack for attending “outside” rodas and for encouraging others in the group to do the same. I understand to a certain extent the reasoning behind Mestre Moraes' rule. But Capoeira politics between Capoeira royal families went down way before my kids were even born nonetheless training Capoeira.
No need to hang out folk’s dirty laundry here. We have all heard the stories, I am sure there is some truth on all sides. But what does it have to do with kids growing up in Capoeira? These are our camarados, our friends; we break bread together, our kids play together in and out-side the roda. They have been since we started training Capoeira. I made an observation in Brazil that FICA peeps would always show their presence at a GCAP roda but GCAP couldn’t play at a FICA roda. Can’t tell you how disappointing it is to watch a FICA roda from the sidelines, after years of playing at FICA rodas, for reasons you don’t entirely understand, especially when the music and the games are jumping off. Couldn’t help but think, “This is wack!” Mestre Joao Grande says that Mestre Pastinha said, “We play Capoeira for the world.” When I first started training Capoeira and had contact with these great Capoeira Masters, Mestre Joao Grande, Mestre Moraes and Mestre Cobrinha all I felt/feel was/is profound love, for the beauty they transmit and their life long commitment to passing it on. 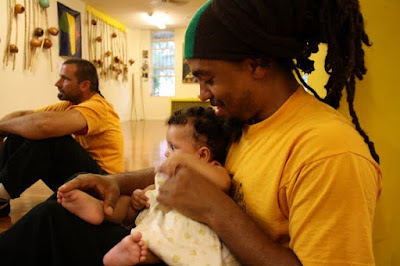 
Now that we are back in the states, we are reconnecting with friends, who so happen to also be Capoeiristas. I know I’ve spoke to Mestre Joao Grande ad nauseam about healing and Capoeira, and I know I’ve mentioned it to Mestre Cobrinha and Mestre Moraes too. Healing my Self and others is what I do. It is up to us, the students, to inherit the karma of our symbolic fathers or heal it. The t-shirt concept was always about bringing people together, of different groups, different styles, even different modalities. Sheet, I’ve broken down the concept of JOGO BONITO to my heroes outside of Capoeira, Meshell Ndegeocello, Saul Williams, and DJ Garth Trinidad. Hey, they all dug my concept and are down for what it was all about…healing.
Having come from immigrant parents and had the experience of being an immigrant in Brazil, I came to discover that immigrants create families out of necessity. I saw it among expats in Brazil and I see it among us here in the states. We have created community and family, it’s the American way. Yeah, our family is dysfunctional, whose isn’t? But it most definitely has some of the most fabulous and interesting personalities that possess JOGO BONITO! 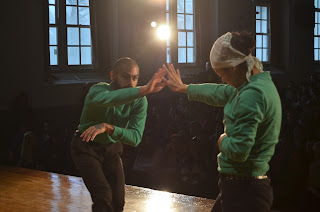 There is a wonderful game that we play,
And it goes like this:
We hold hands and look into each other’s eyes
And scan each other’s face.
Then I say,
“Now tell me a difference between us.”
And you might respond,
“Hafiz, your nose is ten times bigger than mine!”
Then I would say,
“Yes, my dear, almost ten times!”
But let’s keep playing,
Lets go deeper,
Go deeper:
For if we do,
Our spirits will embrace
And interweave.
Our union will be so glorious
That even God
Will not be able to tell us apart.
There is a wonderful game
We should play with everyone
And it goes like this…